PER ERIKSSON commenced his training in Yagyu Shingan ryu under Philip Hinshelwood Sensei whilst he was studying at the University of Western Sydney Australia in 2001. Upon Hinshelwood’s recommendation Per Eriksson became a direct student under the Soke of the Yagyu Shingan ryu ‘Chikuosha’, Shimazu Kenji in 2004. Today Per Eriksson is the branch head of the Northern Europe Shibu where he directs his dojos in Sweden and Switzerland.

Per Eriksson travels to Japan on a regular basis to further his knowledge of the tradition and he is licenced to teach the Yagyu Shingan ryu tradition under the direction of Shimazu Kenji Sensei.

Per Eriksson has instructed martial arts to personnel within the Swedish Police Force and Military. He completed his National Service as Sergeant in the Swedish Military Forces. Today he works as a teacher at Karlskoga Folkhögskola. He has a Master Degree of Education and is currently teaching history, religion and social science.

To promote the Yagyu Shingan ryu, Per has conducted demonstrations and seminars throughout Sweden and Switzerland.  His seminars and demonstrations have been very well received by practitioners of the classical and modern martial arts. Inquires are always welcome and entrance into the tradition is by invitation only.

Please direct any inquires to Michael Eriksson at michael.eriksson@ysr.se 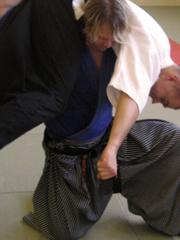